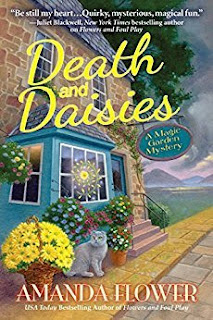 Death and Daisies is the second book in the Magic Garden mystery series.  In this book, Fiona Knox is still adjusting to life in Scotland.  Her godfather has recently died and left her Duncreigan Cottage, its garden, and enough money to open up her new flower shop, The Climbing Rose.  Many of the villagers have been very welcoming, but the local parish minister, Quaid MacCullen, has expressed nothing but disdain for not only Fiona, but for Duncreigan too.  Fiona does her best to move past his anger and threats and to concentrate on her grand opening.  Her grand opening seems to be a success and is starting to wind down when the village’s police officer storms in.  He reports that he has found the dead body of Minister MacCullen.  Chief Inspector Craig is at the grand opening and immediately heads to the crime scene.  Given MacCullen’s hostile feelings towards her, Fiona fears that she will be a prime suspect, and she races after Craig to the crime scene.  Fiona injects herself into the investigation, but in doing so puts herself in danger.

This was a quaint, cozy mystery with a bit of mysticism and romance sprinkled in.  I don’t usually like paranormal stories, but this book had just enough to make it enjoyable and unique.  The author has given us a great cast of characters in this book.  First we have Fiona, our protagonist, who is trying to make a fresh start in Scotland.  She is joined by her sister Isla who has come to stay with her for the summer.  Fiona grapples with accepting the fact that her younger sister is no longer a little girl.  This creates some tension between the two young women.  Fiona also struggles with understanding her relationship with Chief Inspector Neil Craig.  She is unsure of his true feelings for her.  Fiona also gets to know some of the secondary characters in this book better.  She also meets some colorful new characters.  Her suspect list becomes a mix of old and new acquaintances.  Wether good or bad, all of the book’s characters seem genuine.

This was a smartly written, fast paced story that I found very enjoyable.  The mystery was intriguing and kept me guessing all the way until the end.  There are many storylines that are left open for development in future installments. I’m looking forward to following these storylines within the context of future mysteries.  In addition, I’m anxious to read other books by this author.

Thanks to Net Galley and Crooked Lane Books for an ARC of this book.  #NetGalley #DeathAndDaisies