Edinburgh Dusk is the second book in the Inspector-Detective Ian Hamilton mystery series.  The original cast of characters is back plus some engaging historical figures.  The story starts our with Sophia Jex-Blake, the first practicing woman doctor in Scotland, coming to the station to report what she believes was a murder by poisoning.  This would not be the poisoners only victim.  Hamilton discovers that these men who are poisoned all have one thing in common, sleaziness.  With the help of Sergeant Dickerson and a young medical student by the name of Arthur Conan Doyle, Hamilton races to find the murderer before any more unnecessary deaths occur.

I really enjoyed the first book in this series, and relished this second one even more.  We learn more about the characters in this book which helps us to understand them and their actions even more.  This story involves a very dark plot that is slowly wound up and then eventually unveiled.  The reader is taken along a pitch-dark ride through Edinburgh’s seedy side and through the immoral acts committed there. The ride starts all the way in the beginning and runs right through the end of the novel.

In addition to the engrossing storyline, we are also introduced to a couple of new characters that seem to have the potential of being included in the next novel.  Hamilton tries to come to the aid of a woman named Fiona Stuart.  Fiona Stuart, however, is none too happy that Hamilton intervened on her behalf, and is not too shy to tell him.  They continue to have a very tumultuous relationship throughout the story, but she is set up as a possible love interest. Hamilton is also introduced to Arthur Conan Doyle.  Doyle helps Hamilton with the medical aspects in the case, and in the process the two develop a budding friendship.  A friendship that I hope to learn more about in the next installment.

This story reminds me very much of a dark version of Murdoch Mysteries.  In fact, Doyle shows up in that series too, but is much older and is a world renowned author by then.

Thanks to Net Galley and Thomas & Mercer Publishers for an ARC of this book.  #NetGalley #EdinburghDusk 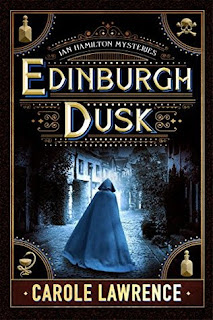