Tallie Graver, a self-employed housekeeper, was cleaning the windows of a local inn when she spied a dead body in one of the rooms.  Tallie was sure the man had been murdered because it was obvious to her (her family operates the local funeral home) that his neck had been broken.  Tallie called the police station to report the crime.  When the acting police chief, Hammond, arrived he was quick to rule that the man had died from a heart attack.  Tallie tried to explain why she disagreed, but Hammond stood firm by his assessment.  He not only refused to listen to her, but he also threatened to throw her in jail if she interfered.  Tallie decided though that she couldn’t let a murder go unsolved, and she stepped in to investigate herself.

Right from the get-go, I felt like Tallie seemed ready for a fight before the fight even found her.  I was a little put off by this.  However, after Hammond’s gruff conversation with her, those feelings seemed justified.  He neither wanted the police to investigate the death nor did he want Tallie to become involved.  Tallie is multifaceted and is not only an amateur sleuth, she is also a best friend, girlfriend, daughter, and housekeeper.  All of these roles round out her character.  For me, the pressure Tallie received from her dad to join the family business made her very relatable.  How many of us haven’t been pressured by a love one to do something, and all we want to say is no, but we don’t want to hurt them?

The author did a good job building this story.  In the beginning, Tallie didn’t have much to go on and so her investigation was slow.  This seemed realistic to me, as you have to find pieces of the puzzle before you can begin to put it together.  Then as she gets more pieces, the momentum begins to build, and the suspense escalates.  Even once Tallie (and the reader) thinks she has gotten things figured out, there are pieces that just don’t fit.

Anyone who enjoys strong female leads and amateur sleuths will enjoy this story.

Thanks to Net Galley and Kensington Books for an ARC of this book.  #NetGalley #DeceasedAndDesist 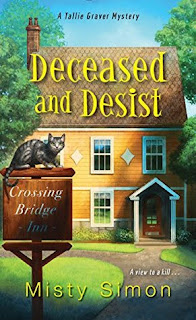 Posted by LLLAcademy at 3:13 PM