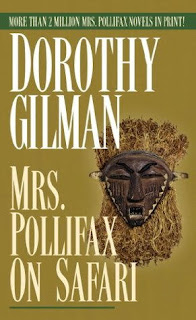 While practicing Karate at home in New Jersey, Mrs. Pollifax gets a call from Carstairs, her CIA contact, and he asks her if should would be willing to go to Africa on a new mission.  Mrs. Pollifax readily agrees.  Carstairs sends his assistant, Bishop, to explain the particulars of her assignment.  Bishop informs her that there is an assassin on the loose, and they need him (or her) captured before he kills again. They don’t know what he looks like, but they have received intelligence that he will soon be on a safari in Zambia.  Her mission will be to go on the same safari and take pictures of all her traveling companions.  After she returns, the CIA will go through the pictures and try to identify the assassin in the group.  The task sounds easy enough, and Mrs. Pollifax is excited to be visiting Zambia.  Once on the safari though, Mrs. Pollifax decides it might be fun to catch Aristotle herself and then turn him over to Carstairs.  That would not be the first or the last mistake she would make on her mission.

This book is another brilliant installment in the Mrs. Pollifax series.  These are such fun books!  The author has done a great job of developing Mrs Pollifax’s character.  She is a character you can’t help but love.  In real life she is an everyday mother and grandmother who likes to garden, go to church, and volunteer at the hospital.  In her spare time though she is a secret spy.  She is a spy unlike any other in your typical spy novels.  For one, her spy work is definitely a side job in her life.  Even when she tells Carstairs she will accept this assignment, it was contingent on her being able to find someone to water her geraniums.  She also doesn’t rely on super secret weapons or unrealistic motorcycle chase scenes to get her man. Instead, even though she always seems to find herself in hot water, she remains calm and collected and seems to find her way out of it.  Despite the fact that her work forces her to look at the dark side of life, her personality remains upbeat and she stills sees the good in people.

The backdrop of the story is an African safari that is adventurous and exciting.  The characters get the opportunity to see animals such as lions and elephants in their natural habitat.  They also get the opportunity to camp in the middle of it all.  The safari gives Mrs. Pollifax the perfect opportunity to study and get to know her fellow travel companions. The author does a exceptional job developing these second characters as well.  Among the sightseers, Mrs. Pollifax also meets a love interest in this book.  Time will tell if she has fallen for the wrong guy.  I didn’t find there was an obvious villain among the group.  Every time I thought I knew who the assassin was, the novel progressed, and then I was sure it was another character.  The novel kept me guessing like this all the way to the end.

For those that like a political twist, the novel has a light take on the morally wrong practice of apartheid.

Although this is a spy novel, I think anyone who enjoys cozy mysteries such as Agatha Christie will adore this series.