Marygene has just gotten out of an abusive marriage and decides to return to her hometown, Peach Cove Island.  While excited to be going home, Marygene is filled with trepidation and guilt at fragmented relationships she abandoned when she left Peach Cove.  The first relationship she tries to repair is with her sister Jena, as the two of them will be running their family business, the Peach Diner.  Eager to make amends, but not step on toes, Marygene helps out at the diner however she can.  On her second day there though, tragedy strikes.  One of the regulars drops dead.  After his death is ruled a homicide by poisoning, Jena is taken into custody as she was the one who made the cake that he ate right before he died.  Marygene knows she can’t sit by and let her sister be tried for a murder she didn’t commit.  So, she goes poking around town trying to figure out who the real killer is.  Her strained relationships with her dad, old friends, high school sweetheart, and even her deceased mother only seem to complicate her investigation.  It isn’t long, however, before she is digging up secrets and putting herself in danger.

Southern Sass and Killer Cravings is the tantalizing first book in the Marygene Brown mystery series.  The author has thought up a marvelous storyline and has told it well.  The author provides us with many possible suspects and motives, and throws us clues and curveballs to keep us guessing.  Even once the murderer becomes apparent, the suspense continues to build as we wait to see how it all unfolds.  I can easily see this book being made into a movie.

This book is filled with many varied and engaging characters.  Marygene has a lot of complicated, intense relationships that could make this story very heavy.  However, the story is counterbalanced by the fun-loving and light-hearted Betsy.

I thought the author did an excellent job of dealing with the issue of domestic abuse in the context of a cozy mystery.  She doesn’t soften the seriousness and tremendous impact of abuse, but she winds up the story with encouragement for survivors.

I can wholeheartedly recommend this book to cozy mystery lovers.  Those that particularly enjoy cooking mysteries will be happy with all the delectable dishes described in the story.  Many of the recipes are included at the end of the book.  Marygene‘s berry crumb bars sounded especially good to me.

I can’t wait for the opportunity to return to Peach Cove.

Thanks to Net Galley and Kensington Books for an ARC of this book.  #NetGalley #SouthernSassAndKillerCravings 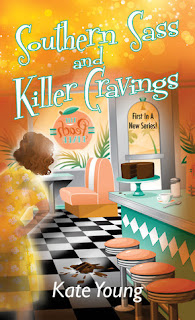 Posted by LLLAcademy at 6:10 PM