Book Review for The Pint of No Return

Sloan Krause is a female brewer in the German themed town of Leavenworth, Washington.  It’s Octoberfest time, and the city is abounding with tourists who are there for the festival which includes beer tasting and other German filled fun.  Sloan has recently started working at Nitro, a nanobrewery, operated by Garrett.  While running errands for Nitro, she runs into a film crew that is gathering footage for a documentary about beer. They become interested in Sloan because she knows so much about beer and how to make it.  They also like that she is a woman in a predominately male field. While talking to the film crew, the star of the show, Mitchell Morgan, comes storming into the store.  He has little time for anyone but himself.  Later, the documentary takes a turn for the worst when Mitchell is found dead.  Was it his ego that killed him or something else?

This book is well written, it has a great story set in a unique setting, and it is filled with great characters.  In a way, this book reminds me of the original Star Trek series.  Not the science fiction part, but the character development.  Viewers would turn in each week to not necessarily see what danger Kirk would land it (although that was always interesting), but to come back to familiar friends and watch as their characters progressively grew and changed.  The relationships ultimately became the force driving the plot.  That is how this story felt to me.  The characters and their relationships really become more important than the murder.  Although the murder was never too far away.  We have Sloan and her changing relationships with Mac and Garrett, her Krause family, her son, and Kat.  Sloan’s relationship with her unknown parents also changes as she receives new information.

I will definitely return to this series to see where these characters go.

This is a perfect book to cuddle up with on a cool fall evening in front of the fireplace.

I enjoyed this book so much, that I think I will read Alexander’s Bakeshop Mysteries.

Thanks to Net Galley and the publisher, St. Martin’s Press, Minotaur Books for an ARC of this book.  #NetGalley #ThePintOfNoReturn 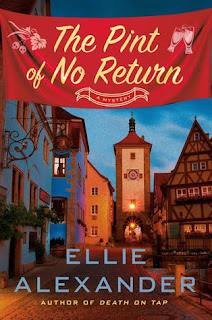 Posted by LLLAcademy at 5:52 PM