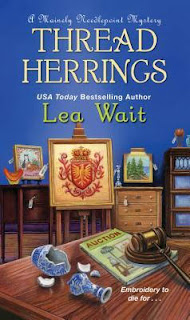 Angie Curtis, the owner of Mainely Needlepoint, was invited to her first auction by her friend, Sarah Byrne, an antique shop owner.  Angie was fascinated by the great variety of items up for auction, and those bidding on the auctions.  She specifically expressed some interest in all of the needlepoints, but it was a badly damaged embroidered coat of arms that truly intrigued her.  She bid on it and won it.  When she got home, she unframed it and found a folded piece of paper with a blue silk ribbon in it.  The paper was a “receipt” for a boy named “Charles” who was left at the Foundling Hospital in England in 1757.  Angie was puzzled by the paper and the coat of arms.  She wanted to find out the story behind them.  Her friend, Clem, who worked at the local new station, suggested she participate in a short piece about the items in order to ask viewers to help her solve the mystery.  That was when her troubles began.  A threat was sent to the news station that warned that Clem and Angie would be killed if they didn’t leave the story alone.  The next day, Clem was found dead. Even with her guilt over Clem’s death, Angie was still determined to solve the mystery.  Will she be able to solve it before she winds up dead as well?

I thought this book had a very riveting plot.  The author does a great job with the rising action of the story.  The intensity of the plot becomes more and more desperate, and the urgency builds and builds.  It was one of those books that is hard to put down because you have to find out what happens next.  A unique detail in this story is that Angie is in hiding for almost all of the climbing action, and she therefore has to rely almost solely on her phone to help her solve the mystery.  We don’t often find cozy mystery sleuths that do almost all of their investigating with a phone.

There are two main ingredients this book is missing though:  suspects and motives.  We have to wait all the way until the end until we find out who and why.  There is never really a suspect list, and no way for the reader to figure out “whodunit?”  When we are finally given a possible suspect there still isn’t a viable motive.  It isn’t until the suspect actually describes what happens that he also reveals the why, and the why seems a little far fetched.

So even though the ending was a little weak, I would still recommend this book to cozy mystery lovers.

Thanks to Net Galley & Kensington Books for an ARC of this book.  #NetGalley #ThreadHerrings

Posted by LLLAcademy at 5:56 PM