One evening on their way to the Lake Eden Inn to listen to a rehearsal for the jazz festival, Hannah and her sister, Michelle, come upon a multi-car accident.  They call 911 and then decide to see if they can help any of the victims.  They come across a bus that happens to contain the band, The Cinnamon Roll Six, which was set to headline the jazz festival. While most of those on board the bus appear to have only bumps and bruises, the keyboard player, Buddy, has an injured hand, and the bus driver is dead.  At the hospital, x-rays show that Buddy has a sprained wrist.  Buddy is taken to a patient room to wait for the doctor to come put a splint on his wrist. Before a doctor is able to treat Billy’s injury, someone enters the room and thrusts a pair of scissors into Buddy’s chest.

The 15th book in the Hannah Swensen series, the Cinnamon Roll Murder, is probably my least favorite in the series so far.  The Swesen ladies have really started to feel that they have become smarter than the police.  Although, Mike, Bill, and the rest of the Lake Eden Police Department, usually come to the same conclusions as they do, but without endangering their own lives or the lives of others.  In addition, in order to solve the crimes, the girls have to deceive and steal from the men they are said to love.  They steal police reports, medical records, and other personal and confidential information. The characters feel as if they are out of control.

This book also felt more like a recipe book than a cozy mystery.  While I usually love the recipes included with the story, it seemed like the recipes moved the book along, rather than the plot.  The mystery was actually rather thin.

While I didn’t enjoy this book, I’m not giving up on this series yet. 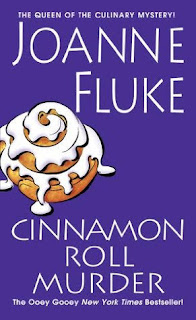 Posted by LLLAcademy at 5:18 AM