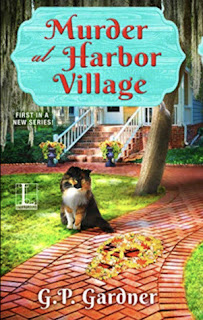 While trying to decide whether or not to take an early retirement, Cleo Mack visits the small town of Fairhope, Alabama.  While there, Cleo meets a handful of very nice, welcoming people.  Cleo decides to visit the pier, and there she meets Nita Bergen, a local, friendly retiree.  Nita sings the praises of Fairhope, along with Harbor Village where she lives.  Cleos decides to take the plunge and retire and move to Fairhope.

In addition to moving to Harbor Village, Cleo is offered a part-time job.  Cleo is hesitant, but decides to take it.  Before she even has a chance to start her new job, the director of the facility is found dead in the Harbor Village swimming pool.  Cleo suddenly finds herself thrust into the position of acting director.  Cleo must not only quickly learn the ropes, but she also finds herself embroiled in the mystery surrounding the director’s death. Things are not as they seem, and around every corner Cleo finds a new question.

Right away, the author does a great job of painting a picturesque picture of Fairhope that help make the reader fall in love with it, too.  Cleo describes it as St. Mary Mead without the stone walls which helps the reader get a feel for the town’s atmosphere as well.  The author goes on to describe what she calls a sky cathedral.  It makes me want to sit on the pier and experience it as well.

In addition to creating such as idyllic setting, the author also created some great characters.  We get to meet both resident of Harbor Village and employees.  Cleo’s friendship with Nita and her husband, Jim, grows as the story progresses.  Jim and Nita also introduce Cleo to two of their friends, Riley and Dolly.  The author seems to set the stage for a possible romance with Riley.  Cleo’s relationships with her employees are a bit more complicated.  There seem to be some discrepancies at Harbor Village and Cleo is not sure who to trust.  She decides to put her faith in Patti, a very likable character.  Cleo wonders if she could be working with a murderer.

Speaking of murder, the murder is the driving force of this story.  The murder draws Cleo and her new friends closer together, and it leads her to get to know everyone at work a little better.  While the murderer gets narrowed down to just a couple of likely people towards the end, the reader must still piece together the whys and the exact circumstances that led to the murder.  This was a great cozy mystery that kept my interest all the way through.  I hope the author writes more books in this series, as I’m looking forward to reading more.

Thanks to Net Galley and Kensington Books for an ARC of this book.  #NetGalley #MurderAtHarborVillage