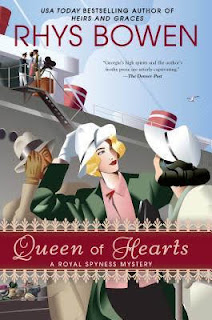 Lady Georgiana is back for the 8th book in the series of Her Royal Spyness.  This time, Georgie’s mother, Claire Daniels, wants to go to America, and she invites Georgie to go with her.  Her mother is traveling to America in order to secure a divorce from her current husband, so she can marry her current love, Max.  The plan is to sail into New York and then head to Reno, Nevada for a quickie divorce.  Plans quickly change when the pair meet Cy Goldman, a movie producer.  He wants Claire to star in his next major movie which is set to start filming.  So, after a quick stop in Reno to establish residency, Georgie and Claire head to Hollywood and Beverly Hills.  Cy decides to take a weekend off from filming and invites some of the movie crew and other guests to spend the weekend at his Hollywood home.  Things take a turn for the worse when Cy is found dead on the floor of his library.  Everyone at the house becomes a suspect, and Georgie tries to sift through all the clues to find out who murdered Cy.

Although this is a mystery book series, I always think of it as mystery lite.  I’ve found these books to be more character driven with a mystery playing in the background.  Rhys Bowen has created some unique and entertaining characters, and it is fun to “watch” how their lives play out.  In this story, we see Georgie’s mother basking in the spotlight  and enjoying every ounce of attention that is paid to her.  As traveling companions, mother and daughter get to spend more time with each other than they normally do.  Although Georgie is excited to be going with her mother, her time with her mother is not a high point for her.  Her mother takes every opportunity given to tell her that she isn’t living up to her expectations in either looks or actions.  When Georgie crosses paths with Darcy O’Mara, she couldn’t be happier.  Their relationship continues to heat up, and readers such as myself continue to root for this couple and hope they make it down the aisle.  Other classic characters appear in this novel as well.  We see Queenie still struggling to be a lady’s maid, and Belinda is back and up to her antics again.  All of these characters are joined by a quirky group of Americans.

There are actually two mysteries entwined in this story.  First we have a jewel thief whom Darcy is in hot pursuit of.  His main suspect is Stella Brightwell, an American actress, who happens to be headed to New York on the same ship that Georgie is on.  The thief strikes again while on board the ship, but manages to go undetected once more.  Darcy, still believing that Stella Brightwell is the thief, follows her to Hollywood.  There Georgie and Darcy meet up again, and this time Georgie introduces Darcy to Cy Goldman, who immediately wants to cast Darcy in his movie.  As part of the cast, Darcy is invited to Cy’s Hollywood house.  Here the second mystery takes place.  Cy is found murdered in his library.  His head has been crushed by one of a new pair of expensive candlesticks.  The second candlestick is missing.  Is this a robbery gone bad?  Has the jewel thief struck again?  Will the murderer kill another victim?  Is one of the guests the murderer?  These are the questions that the small-time county sheriff comes to ascertain.  No one seems to have much faith in him, and Darcy and Georgie attempt to solve the mysteries on their own.

I would highly recommend listening to the audiobook version of this book.  Katherine Kellgren does a spectacular job.  She really helps this series come alive.

Posted by LLLAcademy at 3:47 PM