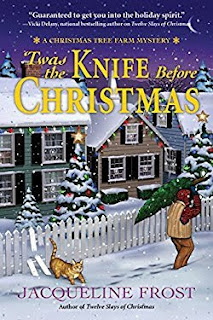 This book picks up one year after the end of the first book in the series, and the author does a great job catching us up with the characters from Mistletoe, Maine.  We learn that Holly’s parents are building an inn on Reindeer Games Christmas tree farm.  The inn is almost finished, and Holly is to become the innkeeper.  Her friendships with Caroline and Ray have really blossomed over the year, and she can’t imagine her life without them.  Caroline has opened her cupcake shop, and Ray is continuing his quest to become an investigative reporter.  Holly’s relationship with Evan seems to be at a standstill.  He has been both distant and elusive, and Holly is not sure where they stand.  The recurring characters in this book are all fun and easy to fall in love with.  We also get to meet some new and interesting characters in this book.

It’s less than two weeks before Christmas and many of the town residents and tourists are gathered around for the town’s annual tree lighting ceremony.  As the tree is lit, a large candy dish filled with peppermint candies is unveiled.  Much to everyone’s chagrin, there is also a body in it.  They body turns out to be that of Derek Waggoner, a successful local businessman and womanizer.  Holly’s best friend Caroline becomes the prime suspect because she had been seen arguing with Derek the night before, and he has been killed with one of Caroline’s knives which was found with only her fingerprints on it.  Holly knows her friend is not a murderer, and she has lots of questions about the case.  She starts asking her questions around town, but almost immediately starts receiving threats to back off the case.  While the threats frighten Holly, she is determined to find out who the real killer is.

I started the second book in this series right after I finished the first.  The first book got me hooked, and I wanted to see what was next for Holly and her friends.  While both books dealt with murders at Christmas, and Holly’s sleuthing, I thought the plots were different enough that I didn’t just feel like I was rereading the same story.  The mystery in the second book is very intriguing and I enjoyed the building suspense the author created.  The mystery was also as good as the first, and I’m hoping for a third book in this series.  The author unquestionably laid the tracks for another story.  There is definite character development in these books, and I would suggest reading them in order to truly appreciate what the author has created.

One of the things I like about both of these books is Holly’s intentions as an amateur sleuth.  While she does get frustrated with the sheriff’s investigation at times, you don’t get the impression that she thinks she is smarter than the sheriff.  She simply has questions that she wants answered, and she feels like she approaches the investigation from a different angle.

This is a great cozy mystery filled with the sights, sounds, and magic of Christmas.

Thanks to Net Galley and Crooked Lane Books for an ARC of this book.  #NetGalley #TwasTheKnifeBeforeChristmas