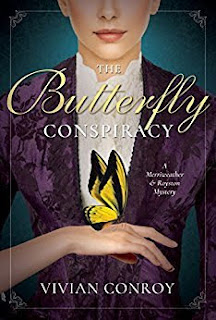 Merula Merriweather is excited to be attending a lecture for the Royal Zoological Society.  She is exuberant because she is going to have a chance to show off her newly hatched butterfly, Attacus atlas.  Her elation is slightly subdued, however, by the fact that she must let her uncle take credit for the discovery as the scientific community won’t recognize a woman’s contributions.  While at the lecture, Lord Raven Royston, questions the authenticity of the butterfly and encourages Merula to let it out of its cage.  After being let loose, the butterfly lands on the arm of Lady Sophia.  Lady Sophia gasps, turns red, and then crashes to the floor where she is eventually pronounced dead.  Some of the attendees jump to the conclusion that the butterfly may have been responsible for her death.  Because Merula’s uncle is considered responsible for the butterfly, he is arrested.  Merula, along with Lord Raven Royston, sets out to prove her uncle’s innocence.  Someone else seems to know what they are up to though and tries to scare them into dropping their investigation.  Will they be able to stay one step ahead and catch the actual killer?

I liked the chemistry in this book between Merula and Raven.  They worked well together, and while a romance may be in their future, this story was about building trust and friendship. Both seem to jump out from typical Victorian rules and seem to be themselves rather than what society would have them be.  They also share a mystery in their past that helps them understand each other better.

The mystery that Merula and Raven set out to solve is very unique.  How many times have you read a mystery book where the suspected weapon was a butterfly?  The mystery is even more complicated by the fact that they must solve the mystery using only tools available during the Victorian Era.  I also thought the solution to the murder was very clever, and it was fun to try and guess.

The end of the book definitely sets up for a sequel, and I’m eager to read it.

Posted by LLLAcademy at 8:17 AM