Book Review - A Talent for Murder 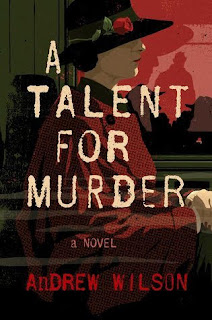 In December 1926, Agatha Christie went missing for eleven days.  Once found, she seemed confused, and offered no explanation for her disappearance.  The cause of her disappearance and the persisting questions about what occurred during those days have left fans and historians looking for answers.  In this book, Andrew Wilson takes well known facts from the case and uses them as the backbone for his fictional account of what occurs during Christie’s missing days.  In doing so, he creates a very intriguing and mysterious insight into what might have happened.

This story starts with a bang, and Agatha Christie is almost immediately accosted by a doctor by the name of Kurs.  He tries to blackmail Agatha by threatening to expose her husband’s affair and her brother’s alcohol and drug addictions.  He tells her, “the newspapers would be very interested to hear about the crimes and misdemeanors of a mystery novelist’s family.”  When this doesn’t sufficiently grasp her in his clutches, he resorts to threats against her daughter’s well being.  Dr. Kurs tells her that the price of his silence is that she must murder his wife.  He has everything planned out up to, and following the murder.  Agatha is to follow his plans to a T and then decide on the actual murder plan herself.  The rest of the book details how exactly those eleven days played out.  During that time, Agatha struggles with the morality issues that have been thrown at her feet.  True to life, nothing is as black and as white as we would like, nor always as they seem.

I really enjoyed the steam with which this book took off.  I was quickly drawn into the mystery, and fascinated with the real life elements included with this fictionalized elements of the story. I think fans of Agatha Christie books will enjoy this story, not so much as an answer to those missing days, but as another mystery to be solved.  The author has written a sequel to this book which I definitely plan to read.