Book Review - Death and the Harlot 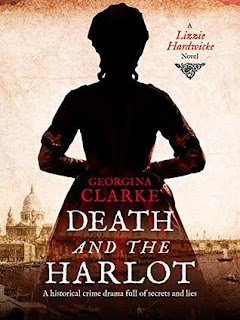 Lizzie Hardwicke is a prostitute living during the Queen Victoria years.  Like many other prostitutes of the time, Lizzie occupation became one of necessity.  Unlike many other prostitutes, however, Lizzie lived in a high end bawdy house which catered to men of wealth, and it provided a higher standing of living for the girls.  A new wealthy client of Lizzie’s, a Mr. George Reed, is found dead, and his valuable items are missing.  Mr. Davenport, of the Bow Street Runners, is send to investigate the crime.  He immediately suspects Lizzie is the guilty party because she was one of the last people to be with him, and she was acquainted with his wealth.  Lizzie knows that no one will work to clear a prostitute’s name, and so she decides she must find out who the killer is.  Davenport says, “Then I look forward to seeing the results of your investigation.”  As the investigation continues, many secrets about the town players turn up, and the list of possible suspects grows considerable.  Lizzie must race to clear her name, and find the real killer before she must face the gallows.

The story has a very entrancing and unique protagonist, a prostitute.  Even though Lizzie seemed very kind hearted, I had trouble with her character at first, but it didn’t take long for her to really grow on me.  She is a strong female lead that realizes she can’t let a killer get away, and she steps up to find him, even when she must put herself in dangerous situations.  She even finds herself facing consequences with the madam of the house for her involvement.  Davenport, another major character, was very gruff when we first meet him.  However, his characters softens up, and he becomes a very likable character.  He goes out of his way to help Lizzie solve the crime even though both his time and resources are limited.

The mystery and plot of this story are very compelling.  You can’t help but want to read on as your learn just how despicable of a man George Reed really was.  Lizzie’s investigation becomes addictive to readers as secrets are ferreted out, and the suspect list grows.  I loved all the clues that Lucy picked up along the way, and the subterfuge employed to hide the real killer.  I particularly like the conclusion, and I can’t wait to read the second book in this series.

The author tries to be true to the time period, and even introduces us to the real founder of the Bow Street Runners, Mr. Henry Fielding.

If you are a fan of historical mysteries, but looking for something a little bit different, I highly recommend this book.

Posted by LLLAcademy at 5:49 AM