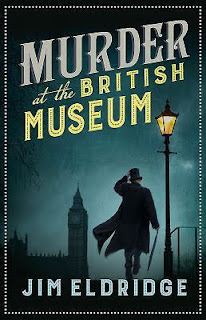 An exhibit on King Arthur is being showcased at the British Museum when Lance Pickering, a professor whose work is prominently featured in the exhibit, is found murdered in a bathroom in the museum.  Daniel Wilson, a former Scotland Yard detective and private enquiry agent, has been asked by the museum’s director, Sir Jasper Stone, to investigate the matter.  Daniel Wilson is accompanied by his new partner, Abagail Fenton, to help him look into the matter.  Scotland Yard is also on the case, but the museum’s director wants to protect the museum’s reputation, and he trusts Daniel’s expertise and discretion in solving the killing.  Daniel and Abagail have their work cut out for them though, especially since Pickering’s murder won’t be the last.

Murder at the British Museum is the second book in the Museum Mysteries series.  Both books are very good, and I think that readers that are fond of historical mysteries will enjoy both of them.  While I thoroughly enjoyed the first book, I thought the second book was even better.

The author has done a superb job of developing both the primary and secondary characters.  They are all unique and fascinating, and they work well together.  I especially appreciated the growth that Abagail has undergone between the two novels.  She is still as fiercely independent and strong, but she is not nearly as brusque.  She is a much more likable character.

The mystery in this story takes center stage, and it is very captivating.  The further I got into the book, the harder and harder it was to put down.  Daniel’s detective skills are top notch, but that doesn’t mean he knew from the outset how the case would go.  He follows leads and hunches that sometimes pay out and sometimes don’t.  He works hard to get from point A to point B, and it was enjoyable to watch him build and unravel the mystery.  It was a heck of a ride all the way until the end.

Thanks to Net Galley and Allison and Busby for an ARC of this book.  #NetGalley #MurderAtTheBritishMuseum

Posted by LLLAcademy at 2:20 PM