Book Review - Murder by the Minster 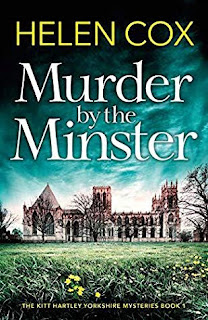 Kitt Harrington is a librarian at the Vale of York University.  One day two detectives show up at the library.  They begin questioning her about Owen Hall, the former boyfriend of her best friend, Evie.  Kitt is confused by all of their questions about Owen, but finally ferrets out that Owen has been killed.  She is even more surprised to find out that Evie is their prime suspect.

Once Evie is released, she decides she needs to investigate Owen’s death in order to clear herself.  Kitt believes this is a terrible idea, but agrees to help in order to help protect her friend from getting into more trouble.  Kitt eventually joins forces with the detectives to solve not only Owen’s murder, but the murders of the other victims as well.

I really enjoyed Murder by the Minster from beginning to end.  I thought the author developed a well written and very intriguing mystery.  The story was unique, and every time I was sure the story was going in a certain direction, the author would surprise me by taking a different path.  The only part of the plot that felt shaky was when Detective Halloran asks for Kitt’s help solving the murders.  It seemed improbable that the situation would play out that way.

Speaking of Detective Halloran, he plays Kitt’s love interest.  I didn’t find out the author is a romance author until after I finished the story.  However, I wasn’t surprised as I found the “clean” romance sections superbly written.  She does such a great job of describing and balancing Kitt’s desire to become involved with Halloran, and her reluctance to get involved in a new relationship after a terrible ending to her previous relationship.  Great build up!

I don’t think that mystery book fans will be disappointed with this book.

I hope the author decides to write a follow up story.  I would love to see what these characters do next.

Thanks to Net Galley and Quercus Publishing for an ARC of this book.  #NetGalley #MurderByTheMinster