Book Review - Murder at the Fitzwilliam 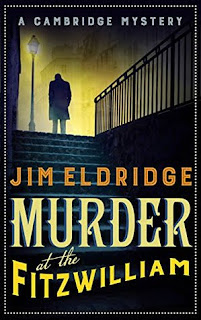 Daniel Wilson, former inspector for Scotland Yard and current private enquiry agent, is summoned to the Fitzwilliam Museum in Cambridge to help solve a murder.  A fresh body has been found in a sarcophagus in the Egyptian collection.  Wilson has been chosen to look into this matter because of his past police performance and his ability to be discreet.  The Fitzwilliam wants this case solved quickly and quietly in order to protect the museum.

Upon his arrival, Daniel Wilson meets Abigail Fenton, archaeologist and current head of the Egyptian collection at the Fitzwilliam.  It was Ms. Fenton who has found the body so Wilson is very interested in what she has to say.  Daniel immediately finds her “formidable…unafraid, (and) not easily put off.”  On the other hand, she seems to find Daniel Wilson annoying.  Shortly after their introductions, they are interrupted by Inspector Drabble who is in charge of the investigation.  Drabble does not want Wilson involved in the case because he believes he will be a distraction, and he doesn’t want Abigail’s involvement because she is a woman.  Daniel and Abigail decide to join forces to solve this crime.

One of the underlying themes of this book is women’s rights.  We have Abigail’s sister who is participating in a campaign for women’s right to vote.  We also have Abigail herself who, while not politically involved, seems to hold as much disdain for men as some men held towards women.  She wants to be looked at as a smart, independent woman who does not need the assistance of a man.  She tends to be brusque and rude to men, especially Mr. Wilson.  Although Abigail’s background story helps to explain part of her behavior, I still felt her character a bit off putting.  Daniel must really like her as he puts up with her throughout the novel.  Daniel himself also has opinions regarding women’s right to vote.  He would not only like to see women gain the right to vote, but also all men as well, not just a select population of them.

The mystery itself was very interesting.  I particularly like books on Ancient Egypt so this added to my enjoyment of the book.  I also found the references to some of  Sir Arthur Conan Doyle’s works interesting.  There are a great cast of potential suspects.  Daniel methodically works his way through the case, discovering new clues and suspects along the way, and then slowly eliminates suspects.  About halfway through the story, I had a good inkling about who the murderer was.  It’s not just about the who though, it is also about the why.  It wasn’t until the ending, that his motives became clear.  An interesting twist adds to the excitement of the conclusion.

I think those that enjoy historical mysteries, specially those set in Victorian England, will enjoy this book.

I’m looking forward to reading the next book in this series.

Posted by LLLAcademy at 6:37 AM