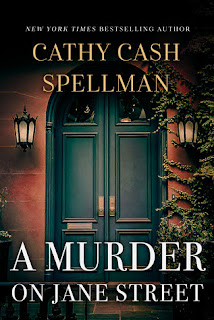 First, I just have to say, WOW!  What a fantastic book!  It was a wild ride from start to finish!

FitzHugh Donovan, a retired Irish NYPD cop, is urgently summoned by his next door neighbor, Mrs. Wallenberg, to her home.  She tells him that she fears she is about to be murdered, and she has a secret that she needs to share with him.  She is so worked up, though, that she can’t seem to get her story out.  She asks him to come back later that night to pick up some books that will explain her story and provide evidence to back it up.  When he goes back to see Mrs. Wallenberg, he finds she has been brutally murdered and her place ransacked.  He calls in the NYPD to investigate.  While surveying the property, one of the CSI techs finds an envelope addressed to Fitz in some bushes between his and Mrs. Wallenberg’s properties.  Inside, Fitz finds three books and a letter that said, “You will know what to do!”

This becomes the basis of a very intriguing murder.  Fitz along with his friends and family form a cabal called the Bleecker Street Irregulars.  This group delves into the books and diary to not only learn about Mrs. Wallenberg’s secrets, but also to decipher them.  Mrs. Wallenberg was not who she appeared. Her secrets date all the way back to World War II and Hitler but seem to have ramifications that reach to present day.

This books is filled with many great and unique characters.  Each character is uniquely drawn and fleshed out.  You truly care about what happens to these people, and you care about the cause they are fighting for.  For the most part, all of the players have a very serious tone, but the character Georgia provides some great LOL moments.

The plot is intricate and was like a rolling boulder that builds in intensity as it progresses.  It was very easy to get wrapped up in the story, and I found it was hard to put down!  I also appreciated how well written the novel was.  The ending of the story is interesting, and the author does a great job of wrapping up all the storylines.

This book is much more than a mystery novel.  It is also a conspiracy thriller, a work of historical fiction, a tale about ultimate sacrifices, a romance story, and a political thriller that is a treatise on not only Hitler’s time, but also today’s political entanglements.  If these descriptions sound interesting to you, I think you will enjoy this book.  This novel is grittier than most of the cozy mystery books that I read, but I truly enjoyed it.


Thanks to Net Galley and The Wild Harp & Company, Inc. for an ARC of this book.  #NetGalley #AMurderOnJaneStreet
Posted by LLLAcademy at 6:18 PM