Book Review - A Most Curious Murder 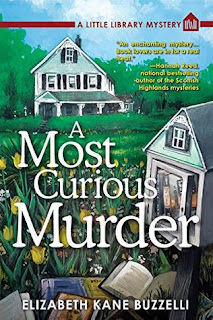 Jenny Weston returns to her hometown of Bear Falls, Michigan after her distressing divorce.  Upon arriving home, she is devastated to find the Little Library that her father had built her mother before his death, has been smashed into pieces and the books destroyed.  Zoe Zola, her mother’s neighbor, joins her as she is surveying the damage.  Jenny takes an immediate dislike to Zoe and finds her very peculiar.  While Jenny thinks a car must have hit the library, Zoe believes that is has been very deliberately hacked up.  She also believes that cranky, old Adam Cane is the perpetrator.  Zoe herself has had problems with Adam Cane as he had threatened to kill her dog.  When he is found murdered in her backyard, she becomes the main suspect as she is the only one with an obvious motive for killing him.  Although Jenny finds Zoe, and her constant references to Alice in Wonderland, irritating, she doesn’t believe that Zoe is capable of murder and sets out to prove it.

I think that Little Libraries are fantastic additions to communities, and I was excited to read a book centered around one.  However, I found this story hard to get into.  I think the main reason was the characters.  I didn’t find them likable or realistic.  Jenny was very judgmental, and it seemed like she was having a pity party for most of the book.  I found it honorable that she wanted to help clear Zoe of a murder she didn’t believe she committed, but her actions did not seem believable.  For instance, she was willing to break the law, such as breaching an area that had been sealed off by the police, for someone she didn’t even like.  Zoe is a unique character, but I found her dialogue very confusing.  Even after rereading passages, I found I still didn’t really understand what she was getting at.  Then there was Jenny’s mom, Dora.  I think she was meant to be a commendable and wise character, but she often seemed oblivious to what was going on.

I thought the mystery itself was pretty good.  The story moved along at a good clip, and it built suspense along the way.  The puzzle became more complex as the book progressed, and I definitely wanted to see how everything came together and to find the answers to: who, what, when, why, where, and how.

I think I will give the second book a try as I like the premise.  Hopefully the character flaws I noticed will improve.

Posted by LLLAcademy at 9:46 AM