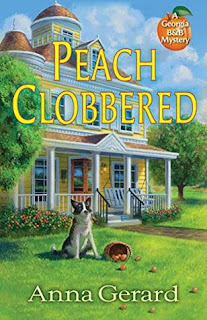 After a divorce and a desire for a change, Nina Fleet decided to buy a beautiful, historic Queen Anne house in Cymbeline, Georgia.  Nina’s grand plans for the house included turning it into a bed and breakfast. She hit her first roadblock, however, when she was informed that the city’s current zoning ordinances would prevent that from happening.  An even more troublesome problem landed on her front door steps.  The problem…a piping, hot mad penguin.  The penguin turned out to be Harry Westcott, the great nephew of the previous owner, in a mascot costume.  Harry was livid and threatened to sue Nina and had come to her house with proof that the house should have been left to him. Nina begrudgingly invites Harry in to cool off.  After allowing Harry the opportunity to recover, Nina politely sends him on his way and vows to learn more about him.

Harry wouldn’t be Nina’s last unexpected guest that day.  The town’s mayor showed up later and told Nina that she had found a way to make the B&B happen.  The only catch was that she had to open immediately to house six nuns who have been displaced by their closing convent.  It seems that the convent’s landowner, Mr. Bainbridge, had refused to renew their lease and they had no where else to go until they have been reassigned.  After their arrival, the nuns informed Nina that they planned to picket Mr. Bainbridge’s office to protest his decision.  Although not planning on protesting herself, Nina headed into town with the nuns.  After a long, hot morning, the nuns agreed to take a lunch break.  It was during this break that Nina saw a woman running and screaming for help.  She tracked the woman down who then told her that somebody had stabbed a penguin and that its body was behind the antique store.  Nina rushed behind the store and found Harry with a stab wound to his chest.  She immediately went for help.  The help wasn’t enough, however, and the victim died on the way to the hospital.  Nina was strangely relieved though to learn that the victim was not Harry as she had believed, but was in fact Mr. Bainbridge. Nina was left wondering why Mr. Bainbridge was killed, and what he was doing in the penguin costume.

I think that Peach Clobbered is a charming introduction to the new Georgia B&B mystery series. It’s a fun and quick cozy mystery read.  The author has cooked up quite a unique, diverse, and likable cast of characters for this story.  I think it can be hard with a first in a series book to do a knockout job with the characters.  I think it is easy to get lost in the plot in the first book with the thought that your readers can learn more about the characters as they read further on in the series. And while a good series will develop the characters over time, you need to have a solid base to build on.  This book does a great job at the start of developing both primary and secondary characters.

Although I really enjoyed this cozy, I found it a little light in the amateur sleuth department.  Nina is really pretty busy throughout the story taking care of guests that she doesn’t have a lot of time for sleuthing.  I felt like the solution almost just fell into her lap, rather than her uncovering the truth.  Having said that though, I really did enjoy the story, and I foresee the second in this series being even better than the first.

Thanks to Net Galley and Crooked Lane Books for an an ARC of this book.  #NetGalley #Peach Clobbered

Posted by LLLAcademy at 1:26 PM