Book Review - By Book or by Crook 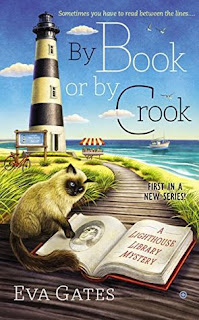 Lucy Richardson has started a new job at the Bodie Island Lighthouse Library.  The library was fortunate enough to be loaned a complete set of first edition Jane Austen novels for three months.  Jane Austen was one of Lucy’s idols so she is beyond ecstatic to actually see and touch these first editions.  The library is hosting a soirée to celebrate this temporary acquisition.  Lucy is excited to be there, but that excitement is somewhat tempered by the fact that Mr. Uppiton, the chair of the library board, has expressed his dislike for her and his desire to see her dismissed.  In the end, however, Mr. Uppiton’s night turned out much worse than Lucy’s.  He is found murdered on the private level of the library.  The head librarian, Bertie, becomes the main suspect, although, one of the detectives suspects Lucy as well.  The library suffers two more blows when two of the first edition Austen novels go missing.  There is talk of closing the library down.  Lucy knows they must solve Uppiton’s murder and find the missing books if they have any hope of saving the library.

By Book or by Crook is a great start to the Lighthouse Mystery series.  It’s a fun read in a really neat setting.  Some reviewers complained about the lack of reality in the setting, but I thought it was fun to just sit back and relax and dream about this beautiful lighthouse that is large enough to encase a full fledged library.

The mystery was intriguing, and we were reminded several times to think about who had the most to gain from the crimes.  There were plenty of potential suspects to keep the reader guessing.  The reader also had to decide if the crimes were related or if one was staged to cover the other up.  I liked that Lucy’s investigations seemed down to earth and not over the top.

I really liked the characters created for this book.  We have an eclectic collection of people who help to make a great story.  Some characters are easier to like than others, but that’s what keeps them so realistic.  Lucy has two possible love interests pop up in this book, and I’m not sure who I’m rooting for yet.  Book 2, here I come!