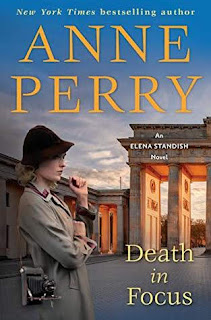 World War I has drawn to a close, and Europe is still hopeful that this “Great War” will be the war to end all wars.  However, at this time, there are already rumblings that things are not ok, and peace is not safe.

After a terrible romantic involvement with a man who would become a traitor to his country, Elena Standish decides to focus on her photography.  Her photography takes her to Italy to photograph an economic conference. Although not looking for a male companion, she finds one in a man named Ian Newton.  They seem to hit it off immediately, and they become even closer after they both stumble upon a dead body.  Ian tells Elena he needs to go to Paris and invites Elena to go with him. Elena accepts his invitation, and the two take off immediately.  While on board the train, Ian goes to get tea, but he never returns.  Elena goes in search of him and finds him crumpled over in one of the other train compartments.  He had been stabbed in the chest and is bleeding to death.  As much as Elena wants to help him, there isn’t anything she can do to stop the bleeding.  In a different way though Elena is given a chance to help.  Before he dies, Ian tells Elena that he is a part of the British military intelligence.  He has information that he needs Elena to carry on for him.  He tells her she must get to the British Embassy in Germany and warn Roger Cordell that Friedrich Scharnhorst is slated to be assassinated. Ian believes that Scharnhorst is a vile man, but he does not want to see England implicated in his death.  Elena rushes to the embassy and warns Cordell of the impending assassination.  Then she attends the rally where Scharnhorst is to be speaking in order to capture pictures of the event.  Scharnhorst is indeed shot, and when Elena gets back to her room she finds a recently fired gun in her closet.  At that point she knows she is being framed, and she goes on the run.  Elena is not sure who to turn to or who to trust.

This was a great thriller/mystery novel.    Elena is a great main character.  She is thought of as one of the weaker members of her family, but shows great strength throughout the novel. A lot of times in a series it takes a few books before we see a major change in our main character.  However, Elena’s first hand view of Germany and Hitler’s growing influence really help transform her.  Elena’s whole family sounds intriguing and I’m looking forward to seeing more of them in future novels.  Perry’s attention to historical details moves the reader as well, reminding us of a terrible series of events that eventually lead to WWII.


If you enjoy Anne Perry’s Monk or Thomas and Charlotte Pitt series, I think you will enjoy this book.  It has a great historical setting, a gripping plot, and adventurous characters.

Thanks to Net Galley and Random House Publishing - Ballantine for an ARC of this book.  #NetGalley #DeathInFocus
Posted by LLLAcademy at 11:55 AM