Book Review - Malice at the Palace 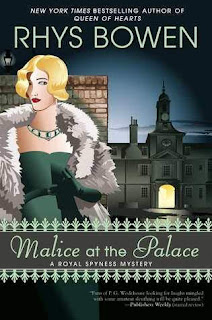 Georgie finds herself once again trying to decide what to do about money and a place to stay.  Once again, the queen steps in at just the right time to give Georgie an assignment.  This time, Prince George is getting married, and the queen wants Georgie to look after and entertain his future bride, Princess Marina of Greece.    Georgie is unsure of the hot reputable spots in town to take Marina so she consults with her friend Belinda, who seems out of sorts.  Georgie and Belinda seem to come up with a suitable plan.  The first night after Marina’s arrival, the royal family hosts a dinner at Buckingham Palace to introduce Marina to the family.  After dinner, Marina and Georgie return to Kensington Palace where they are staying.  Later that night, however, Georgie sees a light in the courtyard and goes to investigate.  When she arrives there she finds a body in the courtyard.  The victim, Bobo Carrington, was a girl who got around town with the rich and famous, so there were many suspects.  Prince George was one of those former lovers so he too is considered a suspect.  Since the Prince is a suspect, the palace wants to keep the investigation as quiet as possible.  Because Georgie has access to the royal family, she has been asked to help with the investigation.  During the investigation, Darcy’s name is brought up, and that opened up a whole other can of worms.  Georgie finds herself wrestling with Darcy’s involvement in the case.  While Georgie struggles to makes heads or tails of this case, she does come up with pretty significant clues that the police miss.  Georgie methodically puts the clues together to solve the puzzle.

I absolutely adore this series, and this one was just as fun as many of the others.  Georgie doesn’t find herself in as many sticky and funny situation in this book, but we have another player who provides plenty of comic relief.  Countess Irmtraut, Marian’s cousin, is a stuffy character  who provides plenty of comic relief.  She takes everything so literally, that you can’t help but giggle.  Queenie of course is still around, and she is still entertaining with her many gaffes. Belinda appears in this novel as well, but is certainly not acting like herself.  Her storyline definitely ends in a cliffhanger.  There is also still a will they or won’t they get married element between Georgie and Darcy.  Once again, we will have to wait for the next book to see what is in store for them.  Georgie’s mother only makes an appearance by conversation, and Georgie’s brother and his wife make a brief appearance at the beginning of the book.  Long enough for Fig to insult Georgie, and then to be jealous of the assignment the Queen gives her.  Most of the other characters are new players, or small players from previous novels.  Many of the new characters that play prominent roles in this novel are based on real life characters.  Some of these people’s lives are explained at the end of the novel.  My only complaint about this particular installment of the series is how the crime is wrapped up, and it is the only reason I’m not giving this book a 5 star rating.  I won’t say anything more about the ending because I don’t want to spoil it for others.

I listened to this book as an audio book read by Katherine Kellgren.  She does such an excellent job with all the voices.  You really feel like you are there with Georgie and friends.  Kellgren definitely gets at A+ for her performance.

Posted by LLLAcademy at 6:40 AM