Book Review for a Shot in the Dark 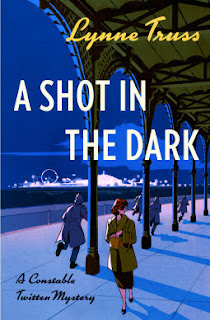 A Shot in the Dark
By:  Lynne Truss
Bloomsbury USA
3 Stars

At the beginning of the story the author vowed to “play fair with readers, Making no use of divine revelation, feminine intuition, mumbo jumbo, jiggery-pokery, coincidence, or acts of God.”  And the author follows through with her promises, and plays fair with the readers.  She sets out a very methodical plot, and does so in a very clever way.  She introduces us to the three main police characters Captain Stein, Sargent Brunswick, and Constable Twitter.  All three have very different personalities.  When a loathsome theater critic, A. S. Crystal is killed during the production of A Shilling in the Meter, they all set out to try and solve the case.  Each, however, does so on their own path.  Stein would rather the whole incident just go away so he can concentrate on his radio show.  Sargent Brunswick seems to want to prove himself, but isn’t exactly sure where to begin.  Constable Twitter, a self-proclaimed genius, is new the station, and he knows exactly how he wants to solve this case.

The investigation felt like they were on three separate mine cars with no individual steering controls.  At times it even felt like they were jumping tracks.  I kept waiting for the cars to crash and have the investigation end up in shambles.  However, the author was carefully able to control these mine cars behind the scenes.  She leads them down twisting and turning paths, and even paths that the reader doesn’t expect (though not far fetched).  She is able to slow these cars down so they stop right before the point of collision. None of the paths hav led down the wrong track, and in fact all three seem to intertwine.  The ending is surprising, but still within the author’s own words of “…play(ing) fair with the readers.”

This book felt like an old time mystery, and I would highly recommend it to anyone who enjoys that genre.

Thanks to Net Galley and Bloomsbury USA for the opportunity to receive an arc of this book.  #NetGalley #AShotInTheDark

Posted by LLLAcademy at 7:15 AM